The sad news of the loss of Sir Terry Pratchett has had a huge effect on the literature community, but has rung true with many of the 850,000 people diagnosed with dementia and of course their family and friends. We all know and love many books penned by the famous Sir Terry Pratchett, but it was at the 2008 Alheimers Conference that he fixed himself firmly in the hearts of those living with dementia. He announced to the world that he too was living with this diagnosis and all that it throws at those affected. His witty and heartfelt words brought awareness of the disease to the masses and for many was seen as a great turning point for public awareness and sparked new interest in the battle to defeating this disease.

Sir Terry Pratchett not only financially supported research into dementia, but his notoriety and openness of his diagnosis provided more than just financial benefits, it acted as motivation and a feeling of comradery to fellow sufferers and their families.

Alzheimer’s Research UK have vowed to honour his memory by striving to continue the push forward with research that will hopefully one day defeat the condition that took Sir Terry and so many, many more from us. 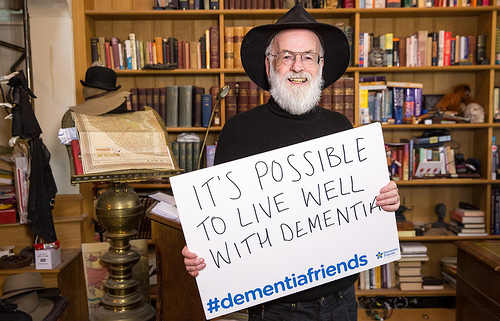